Frontiere was considered to be the most prominent female owner in the history of the league which has been dominated by males. While she was in charge the team won the Super Bowl once and reached it two other times as well as making the playoffs 14 times. Frontiere was known by the nickname "Madame Ram" and also created the St. Louis Rams Foundation and sat on many boards including the local United Way and the American Foundation for AIDS Research. She was married six times and had two children including co-owner of the Rams Chip Rosenbloom. Georgia Frontiere passed away on January 18, 2008 at age 80 from breast cancer. 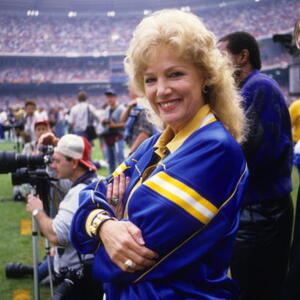