Fred DeLuca net worth: Fred DeLuca is an American businessman who has a net worth of $2.8 billion. Not merely famous for his net worth, he is best known as the founder of Subway, one of the most successful fast food franchises on the entire planet. Subway began in 1965, when DeLuca was only 17 years old.

He managed to scrounge up a thousand dollars to start a sandwich stand, with the goal being to provide a healthy alternative to traditional fast food like cheeseburgers or pizza. 22 years later, in 1987, the now thriving Subway franchise reached the milestone of 1000 locations. As a point of comparison, consider that by that time fast food giant McDonald's only had 800 locations. Now, Subway is one of the most popular fast food restaurants in the world thanks to memorable advertising campaigns such as "the Subway diet" espoused by Jared Fogle and "five-dollar footlongs," a campaign and catch jingle to match touting the chain's foot long sandwiches for only five dollars. In a count from October of 2011, there are 35,400 Subways in 98 countries, producing a grand total of more than $9 billion in sales every single year. Clearly, Fred DeLuca is one of the great American success stories. 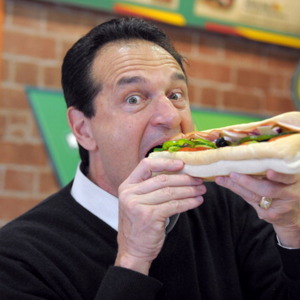