How much is François-Henri Pinault Worth?

Francois Henri Pinault net worth: Francois Henri Pinault is a French businessman who has a net worth of $7 billion. Francois Henri Pinault was born in Rennes, France in May 1962. Pinault is the chief executive officer of Kering. He graduated from HEC School of Management in 1985 and served in the military in the French Consulate Economic Expansion station. Pinault started working at Kering in 1987 and in 1988 he was named manager of the buying department. He became head manager of France Bois industries in 1989 and of Pinault Distribution in 1990. Pinault became CEO of CFAO in 1993 and CEO of Fnac in 1997. His father Francois Pinault gave Francois Henri the presidency of Artemis in 2003 and he became Chairman of the Board and CEO in 2005. He became president of Puma's Executive Committee in 2007. In 2010 he acquired the brand Volcom. Pinault married actress Salma Hayek in 2009 and was previously married to Dororthee Lepere. He has four children. Kering made nearly $10 billion Euros in 2012 and had a profit of $1 billion Euros. Pinault launched Kering's Corporate Foundation for Women's Dignity in Rights in 2008. 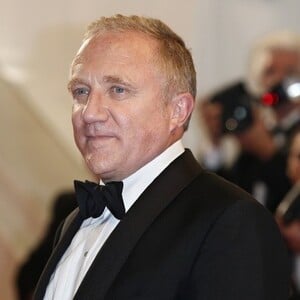