Ernesto and Kirsty Bertarelli Net Worth

However, the main contributor to their mutual net worth is Ernesto who inherited biotech giant Serono, maker of the billion-dollar multiple sclerosis drug Rebig. Actually, he and his sister Dona both were heirs to the company after their father's death in 1998. The siblings expanded the company to $2.4 billion in revenues before selling it to Merck in 2007 for $9 billion. A passive beneficiary from the deal was their mother, Maria Iris. Now, Ernesto and Dona co-chair the Bertarelli Foundation that is mainly focused on marine conservation and life sciences research. A yacht enthusiast, he owns a $100 million super yacht called Vava II, and he has a yacht racing team, Team Alinghi, which races in the Extreme Sailing Series. Having American billionaire Larry Ellison as a rival, Bertarelli had won the competition twice, in 2003 and 2007. His wife Kirsty, whom he married in 2000, is actively involved in the yachting operation. Also a songwriter and singer, Kirsty released her first single, "Send Out A Message (To The World)" in April 2013. 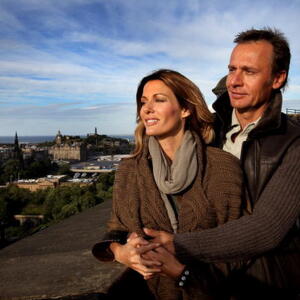