Erivan Haub Net Worth: Erivan Haub is a German entrepreneur who has a net worth of $5.7 billion, a fortune that he shares with his family. The Haub clan still owns the Tengelmann Group, one of the largest retailers and leading investors in start-ups in Germany today. Mr. Haub derives the bulk of his wealth from the group and he is still best known as former manager and partial owner of Tengelmann. The family set up the business more than 140 years ago, and today is run by Erivan's sons. Born 29 September 1932 in Wiesbaden, Haub took a degree in Economics from the University of Hamburg, as well as he completed two internships in the USA prior to his graduation. Haub joined the family business in 1963 and six years later, upon the death of his uncle Karl Schmitz-Scholl, he became the group's managing director. It was in 2000 that he handed over the CEO position to his son Karl-Erivan, after which he entered the supervisory board. Haub's other son, Christian W. E. Haub, is also involved in the family business, serving as co-CEO of Tengelmann as well as chairman of Greenwich, Connecticut-based investment firm Emil Capital Partners. However, Erivan Haub earns the credits for the company's significant expansion. Under his helm, the company took over the Kaiser's grocery store in 1971 and in 1972, the group founded Plus, a discount grocery. In the late 1970s, Haub also concentrated on international growth which led to the taking over of The Great Atlantic & Pacific Tea Company in 1979. In 1988 the Erivan K. Haub School of Business at Saint Joseph's University was renamed in his honor. 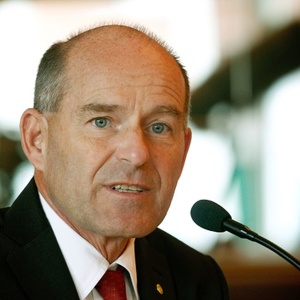