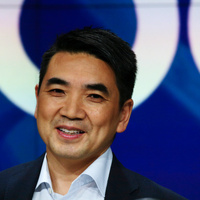 Eric Yuan net worth: Eric Yuan is a Chinese American businessman and entrepreneur who has a net worth of $25 billion. Eric earned his fortune as the founder and CEO of Zoom Video Communications. As of this writing, Eric owns 19% of Zoom. When the company IPO'd in June 2019, his stake was worth $3 billion. A year later, after Coronavirus, his net worth had grown to $14.6 billion.

Early Life and Career Beginnings: Eric Yuan was born in China on February 20, 1970. He graduated from Shandong University of Science and Technology. He later earned a Master's degree in engineering from China University of Mining an Technology.

After hearing a speech by Bill Gates in 1994, Eric decided he wanted to move to the United States to get in on the growing dotcom industry. His visa application was rejected eight times over a two year period. Finally he landed a job at WebEx in 1997. A decade later he was the Vice President of Engineering. In March 2007, the same year of his promotion, Cisco acquired WebEx for $3.2 billion. Eric eventually rose to the title of Corporate Vice President of Engineering at Cisco Systems.

The company's private market value hit $1 billion for the first time in June 2017 thanks to a $100 million investment from Sequoia Capital.

After Zoom's first day of trading, Eric Yuan was left with a $3 billion paper net worth thanks to his 19% ownership stake in the company. A month later his net worth grew to $4 billion.