Eli Broad net worth: Eli Broad was an American businessman and philanthropist who has a net worth of $7.2 billion dollars at the time of his death. Over his five-decade business career, Eli Broad has managed to build two Fortune 500 companies, KB Home (formerly Kaufman & Broad) and SunAmerica, from scratch. Later in life he and wife Edythe were dedicated to philanthropic causes, giving a fortune away through The Broad Foundations which was committed to furthering entrepreneurship in education, science, and the arts. Eli Broad died on April 30, 2021 at the age of 87.

Born on June 6, 1933 in the Bronx, New York, and raised in Detroit, Broad was the only child of Lithuanian-Jewish immigrants. He was 20 years old when he bought his first real estate.

In 1957 he co-founded the home builder Kaufman and Broad Home Corporation using $25,000 borrowed from his in-laws. Kaufman & Broad (now KB Home) earned a reputation building as a type of housing that would appeal to a new generation of Detroit home buyers flocking to the suburbs. The company would eventually turn into one of the nation's biggest home builders.

In 1971, Eli Broad purchased family-owned Sun Life Insurance. He transformed the company into a retirement savings powerhouse called SunAmerica. Broad sold SunAmerica in 1999 for $18 billion. He held the position of SunAmerica's CEO, currently a subsidiary of AIG, until 2000.

For much of his remaining life Broad was largely devoted to philanthropy and charity. In 1984 Eli and his wife Edythe created the Broad Art Foundation with the aim to advance entrepreneurship for the public good in education, science and the arts. The couple also opened a museum in LA called The Broad. Eli was a member of the Giving Pledge. 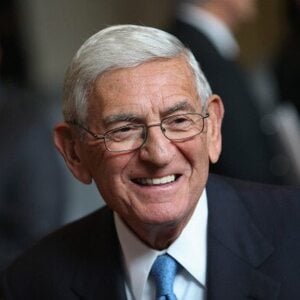