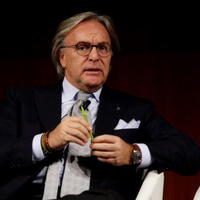 Diego Della Valle Net Worth: Diego Della Valle is an Italian entrepreneur who has a net worth of $1.9 billion. Born on December 30, 1953 in Sant'Elpidio a Mare, Italy, he has continued the family tradition of shoemaking together with his brother Andrea Della Valle. His grandfather, Filippo Della Valle, established a shoemaking business in the 20s, and later, his father, Dorino Della Valle, led the company. Eventually, the family business came in the hands of the brothers, and Diego was eager enough to expand the family tradition into the now well-known Tod's in 1978. The Italian leather company is active in making luxury shoes and purses, which is successfully growing because of the increased sales of 14% in China and Hong Kong. A graduate of Law in the University of Bologna who left his law career in order to maintain the family tradition, Diego now serves as Chairman and CEO of Tod's, and together with his brother Andrea, they own 56% of the company's shares. Moreover, the Della Valle duo is a part of Piaggio & S.p.A. with 2% shares and of Bialetti Industrie SpA with 11% shares, and they also own stakes in the luxurious eyewear company Marcolin and in the U.S. retailer Saks. In addition to his interests, Diego sits on the boards of numerous companies like Banca Nacionales del Lavoro, Maserati, Ferrari and LVHM. Also, he has donated $33 million to renovations of crumbling Coliseum in Rome. What's more, Diego is the person who attacked Silvio Berlusconi publicly for over-taxing large businesses and not supporting the small ones.