What is David Geffen's net worth?

David Geffen is a Brooklyn-born record executive, film and theater producer and philanthropist. David Geffen has a net worth of $8 billion dollars. David Geffen is probably best known for being founder of Geffen Records, where he had enormous success with artists like Donna Summer, Nirvana, Blink-182, Elton John, Kylie Minogue, Enya, Cher, Neil Young, Peter Gabriel, Guns N' Roses… just to name a few. Geffen Records, perhaps most famously, released John Lennon's 1980 album Double Fantasy. Geffen is also one of the three co-founders of movie production studio Dreamworks SKG. The "SKG" stands for "Spielberg, Katzenberg and Geffen." Dreamworks has generated more than $16 billion at the global box office alone, to date. That does not include home movie sales and merchandise.

David Lawrence Geffen was born on February 21, 1943 in Brooklyn, New York. He dropped out of two east coast schools before moving to California in the early 1960s to pursue an acting career. In 1961, he appeared as an extra in the film, The Explosive Generation, but he truly started his career in the mail room at the William Morris Agency (WMA). At WMA he quickly was promoted to work as a talent scout.

In 1970 He left WMA with the intention of becoming a music manager for artists he had previously scouted such as Jackson Browne. After struggling to land Browne a record deal, Geffen did the next best thing. He founded his own record company! He tapped a friend from the WMA mail room named Elliot Roberts to be his co-founder.

He named the company Asylum Records. The name Asylum was chosen because of their reputation for signing artists who could not land a record deal anywhere else.

In 1972 Asylum was acquired by Atlantic Records' parent company, Warner Communications which merged it with Elektra Records to form Elektra/Asylum Records. Geffen remained in charge until December 1975, when he went to work as vice chairman of Warner Brothers film studios. He left Warner Brothers shortly after starting with the company due to being misdiagnosed with cancer and entering early retirement.

In 1980, after being given a clean bill of health, he founded Geffen Records. The label did well throughout the 80's thanks to releases from artists like Berlin, Kylie Minogue, Enya, Asia, Wang Chung, Sammy Hagar, Elton John, Irene Cara, Cher, Debbie Harry, Don Henley, Joni Mitchell and many more.

In 1990 he sold Geffen Records to MCA Music Entertainment for 10 million shares of MCA stock. When MCA was acquired in 1991 by Japanese conglomerate Matsushita Electric for $6 billion, Geffen's stake was worth $700 million. That's the same as around $1.3 billion after adjusting to today's dollars. This windfall coupled with real estate, art and other assets left Geffen the richest person in the entertainment industry and a billionaire overnight.  He also received a generous employment contract that lasted four years.

When he sold the company to MCA, he gave his longtime secretary 1% of the sale. She ended up earning more than $5 million from the various deals (a little less than $10m after adjusting for inflation).

After the sale, Geffen Records would continue to have enormous success with artists like Mary J. Blige, The Roots, Blink-182, The Game and Common. 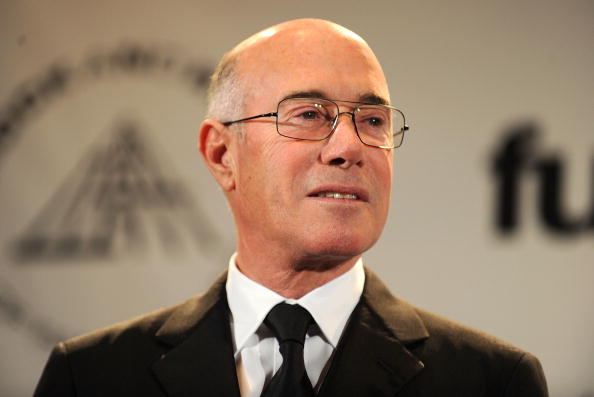 Though he may be best-known as a co-founder of Dreamworks, David has been producing movies since the early 1980s through The Geffen Film Company. He produced 1986's Little Shop of Horrors, 1983's Risky Business and 1988's Beetlejuice.

In 1994 he co-founded Dreamworks SKG with Steven Spielberg and Jeffrey Katzenberg. They would go on to have enormous success thanks to movies like Shrek, Shrek 2, Kung Fu Panda, Antz, Shark Tale and many many more. Dreamworks has generated more than $15 billion at the global box office and billions more in home movie and merchandise sales.

They also had a down period, coming frighteningly close to bankruptcy after the failure of 2003's Sinbad: Legend of the Seven Seas which lost the studio more than $125 million.

In 2005, Viacom acquired Dreamworks' live action studio for $1.6 billion (including the assumption of $400 million in debt).

Geffen stepped away from Dreamworks in 2008.

David Geffen is an extremely generous philanthropist. He plans to give away the majority of his fortune to charity before he dies and donates all new earnings to charity today. He has donated hundreds of millions of dollars to UCLA, making him the largest individual benefactor for the UC system.

He is also vocal and quite involved with politics and has supported candidates like Bill Clinton and Barack Obama. He was also vocal about his support and donated money to try to prevent Prop 8 from becoming law in California. Geffen is openly gay, and in May 2007, Out Magazine ranked Geffen first in it's list of the fifty "most powerful gay men and women in America." In April of 2014, on the heels of a scandal involving Donald Sterling who is the owner of the Los Angeles Clippers, David Geffen (along with Oprah Winfrey and Larry Ellison) said he would be interested in buying the team from the scorned owner. That purchase ultimately did not go through.

A keen art collector since he first started to achieve success, today David owns what is considered one of the most-valuable private collections in the world. His art collection is worth $2-3 billion, accounting for a solid portion of his net worth. In 2006 he sold two pieces – a Jackson Pollack and a de Kooning – for a combined $277 million. In 2016 he sold a 1955 de Kooning oil painting for $300 million and a 1948 Jackson Pollack for $200 million. Both were bought by hedge fund billionaire Ken Griffin.

David has owned a number of extremely valuable yachts over the years. In 2011 he sold his yacht Pelorus to a UAE Sheikh for $240 million. In 2007 he became the co-owner, with Oracle CEO Larry Ellison, of a $200 million custom-built yacht called Rising Sun. It is the 12th-largest yacht in the world. Ellison sold his share to Geffen in 2010. In total, Geffen has spent $590 million on his share of the yacht.

In 2013 he bought a home in Malibu on the highly sought-after Carbon Beach. In 2017 he sold the property for a mind-numbing $87 million. He still owns a substantial Carbon Beach home that he bought in 2008 for $9.8 million.

In July 2019 David paid $30 million for a 1-acre vacant lot in Beverly Hills, California. A year and a half later he sold the lot to a Santa Barbara-based real estate investor for $34 million. A cool $4 million for around 15 months of ownership, roughly $266k in profit per month.