David Azrieli net worth: David Azrieli is a Canadian-Israeli real estate tycoon, developer, designer, architect, and philanthropist who has a net worth of $2.9 billion. Being the head of Montreal-based Canpro Investments Ltd., Azrieli continues to expand his North American and Israeli real estate empire. Starting small by building four homes in a Montreal suburb, Azrieli and his family stand behind the construction of numerous Israeli office buildings and shopping malls including Jerusalem Shopping Mall in Malcha, Jerusalem, Kanion ha-Negev in Beersheba as well as the eponymous Azrieli Center in Tel Aviv.

Another proof that the family patriarch actively works on extending further his North American real estate holdings, is the purchase of a Houston office building in early 2012. The Izraeli group, which went public in June 2010, helped Azrieli earn many prestigious honors such as the Order of Canada, the Order of Quebec and the State of Israel Jubilee Award. He has also been presented with numerous honorary degrees from universities around the world, most notable being the Master's degree in architecture that he has received from Carleton University at the age of 75. In addition to the above, Azrieli is an avid art collector who maintains a large Jewish art collection, some of which are displayed at the Tel Aviv Museum of Art and the Haifa Museum of Art. 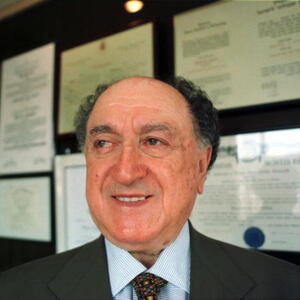