Clive Palmer Net Worth: Clive Palmer is an Australian entrepreneur, businessman, politician and activist who has a net worth of $2.2 billion dollars. Clive Palmer owns Mineralogy Pty Ltd., an ore mining company that operates in Western Australia. He also owns the Australian football team, Gold Coast United FC. He was also on the faculty of Deakins University from 2002-2006.

Born in Melbourne, Australia, in 1954, Clive Palmer dropped out of the University of Queensland before completing his law and journalism studies. He has been involved in several business industries; Palmer is the owner of Mineralogy, which works in iron ore reserves, and he later bought Waratah Coal, Queensland Nickel, and the Palmer Nickel and Cobalt Refinery. In 2008, he ventured into soccer, buying Gold Coast United in an effort to boost his image in China. Four years later, his license was revoked by the Football Federation Australia, and Palmer founded a competing league. Palmer is the businessman behind the creation of "Titanic II", a recreation of the famous doomed ship that is set to sail from Southampton to New York in 2016. He is also the developer of Palmer Coolum Resort: Dinosaur Park, a theme park with animatronic dinosaurs inspired by "Jurassic Park". Palmersaurus opened in late 2013 in Australia. In 2013, he created his own political party, Palmer United Party, to contest the federal election and ended up winning the Queensland seat in the House of Representatives. Palmer's first wife, Susan, died of cancer after 22 years of marriage. He has been married to his second wife, Anna Topalov, since 2007. 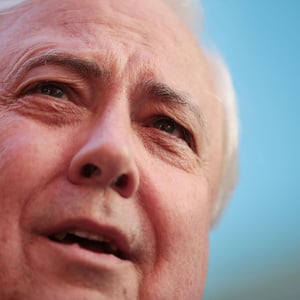