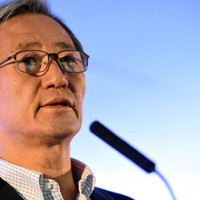 Chung Mong-Joon net worth: Chung Mong-Joon is a South Korean businessman and politician who has a net worth of $1.6 billion. Chung Mong-Joon has become one of the richest politicians in the country, thanks to his stake in Korean shipbuilder Hyundai Heavy Industries, the world's largest shipbuilding company. Being the sixth son of the Hyundai conglomerate founder, Chung Ju-yung, Mong-Joon is the biggest individual shareholder in the company. He ran the company until 1988, when he entered politics. Ever since, he has been a member of the National Assembly of South Korea, currently being in his fifth term in office. In 2002, he ran for the presidency, but he didn't win the elections. As a representative of the Saenuri Party, Chung has recently expressed his support for nuclear armament saying: "Seoul can no longer deal with a neighboring rogue state armed with a machine gun, when it only has a piece of stone." What's more, he is said to have been close to South Korea's former president, Lee Myung Bak, who has previously worked at Hyundai. As for the Hyundai conglomerate, it is now run by Mong-Joon's billionaire brother, Chung Mong-Koo. In addition to the above, Mong-Joon is the former president of the Korea Football Association, who presently acts as honorary vice president of FIFA. A man of many interests, Chung Mong-Joon is married with four children.