Chung Eui-Sun net worth: Chung Eui-Sun is a South Korean businessman who has a net worth of $4.2 billion. Chung Eui-Sun is the only son of Hyundai Motors chairman Chung Mong-Koo. Chung Eui-Sun serves as the Vice President of the company. Having earned a master's degree in business administration at the University of San Francisco, Chung worked at Japanese trading house Itochu's New York office prior to Hyundai.

He joined Hyundai Motors in 1994, while in 2005 he moved up the ranks, becoming the President of Kia Motors, which is also managed by the Chung family. Chung Eui-Sun earns the credit for the successful launch of small family car Kia Cee'd in Europe, along with the Soul and the Forte. He acquired his current Vice President position in 2009. The majority part of his wealth comes from Hyundai Glovis, the conglomerate's rapidly-expanding logistics arm, where he is the largest individual shareholder. In addition to the above, Chung Eui-Sun is the president of the Asian Archery Federation (AAF), which is the continental governing body of the sport of archery in Asia. 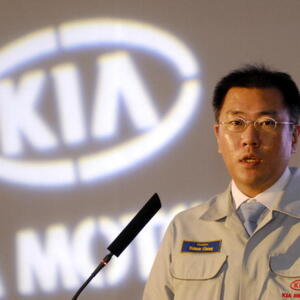