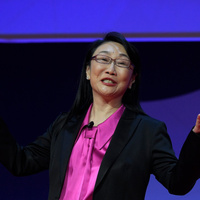 Cher Wang Wenchi Chen net worth: Cher Wang Wenchi Chen is a Taiwanese entrepreneur who has a net worth of $1.1 billion. Cher Wang Wenchi Chen is the daughter of Taiwanese entrepreneurial icon Wang Yung-ching. She has her father's entrepreneurial spirit and currently chairs HTC, Taiwan's largest smartphones and tablets maker and one of the leading in the world. Making its beginnings as a manufacturer of devices based mainly on Microsoft's Windows Mobile operating system (OS) software, HTC widened its focus to mobiles based on the Android OS in 2009, as well as to Windows Phone OS the following year. Thus, interests in smartphone manufacturer HTC have almost tripled in 2010 on strong sales, a boost that catapulted her to the top of Taiwan richest list at the time. However, while the brand has been facing especially fierce competition from Apple and Samsung, Cher Wang has been leading the company upwards which eventually turned her into one of the most powerful and successful women in technology. Often referred to as "the pride of Taiwan," she is married to Wenchi Chen who is serving as the Chief Executive Officer of VIA Technologies. The couple has two children together.