Cheng Yu-tung net worth: Cheng Yu-tung is an Asian businessman who has a net worth of $14.5 billion. That net worth makes Cheng Yu-tung one of the richest people in Hong Kong. Born in Shunde, Guangdong, Republic of China, Cheng Yu-tung is now based in Hong Kong. Until just recently, he was the CEO of New World Development, a family-owned real estate development firm. He began his professional career with a jewelry business called, Chow Tai Fook. Chow Tai Fook grew to become Chai Tai Fook Enterprises and expanded into multiple business ventures, including serving as the umbrella corporation for New World Development. Chow Tai Fook/New World Development now own multiple properties in Hong Kong, Macau, and abroad, including five high-end hotels. Most recently, the company purchased the Carlyle Hotel in Manhattan. The company also runs the Sheraton Marina hotels. In addition to his work with Chow Tai Fook, he also serves as honorary consul for Bhutan, and on the board of Hong Kong's third largest bank, Hang Seng. He announced his retirement in early 2012, and passed leadership to his son. 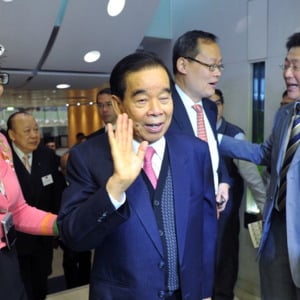