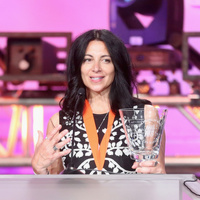 Carolyn Rafaelian net worth: Carolyn Rafaelian is an American entrepreneur and businesswoman who has a net worth of $100 million. Carolyn's net worth once topped $1 billion and was enough to make her one of the richest self-made women in America. Unfortunately her financial position has suffered enormously in recent years.

Carolyn Rafaelian was born in Providence, Rhode Island. Her father opened a jewelry factory in 1966. In 1994 Carolyn joined her father's business and in 2002 she and her sister took over entirely.

Unfortunately the good times did not last. In July 2019 Carolyn filed a gender discrimination lawsuit against Bank of America. The bank in turn claimed that her company was in default that Alex and Ani was in default on a $100 million line of credit. Sales at the company had reportedly dropped 60%, at least partially due to the COVID pandemic.

In the ensuing debacle, Carolyn sold 20% of her stake in the company to an investor called Lion Capital, upping their stake to 60%. Carolyn stepped down as CEO in September 2019 and stepped away from designing in October 2020.