How much is Carl Icahn Worth?

Carl Icahn net worth Carl Icahn is an American businessman, investor, and activist shareholder who has a net worth of $20 billion. Carl Icahn was born in Queens, New York, in February 1936. Icahn graduated from Princeton University and then dropped out of New York University School of Medicine to join the Army. Today he is known as one of the most successful activist investors in the world. He started out as a stockbroker on Wall Street in 1961. He formed Icahn & Co. in 1968 and took controlling positions in various corporations such as RJR Nabisco, Texaco, TWA, Phillips Petroleum, Western Union, Viacom, Uniroyal, Marvel Comics, Revlon, Blockbuster, Time Warner, and Motorola. His reputation developed as that of a ruthless raider after a hostile takeover in 1985 of TWA. In 2013 Icahn as outspoken regarding Apple stock. In the same year he sold nearly 50% of his stock in Netflix for over $800 million in profit. This transaction is said to be one of the largest stock gains in history. He has been married twice, to a Czech ballerina, and now to former broker Gail Golden. He has made many monetary contributions, including to his alma matter Princeton and Mount Sinai Hospital in New York.

Net Worth details: Carl Icahn is the owner of 92 percent of Icahn Enterprises which controls Tropicana Entertainment, Federal Mogul, American Railcar, and more. He is the owner of XO Holdings which he purchased in 2011 and is expected to sell for $1.8 billion in 2017, which includes an option for Verizon to buy his lease for $200 million. He acquired the railcar company ACF in the 1980s and is invested in auto parts, scrap metal, biotech, and petroleum refining. 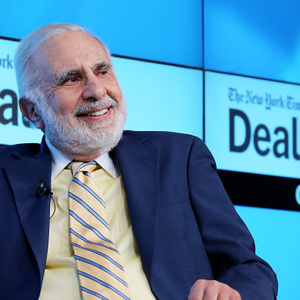