What is Bill Gates' net worth?

Bill Gates is an American business magnate, founder and former chairman and CEO of Microsoft, philanthropist, and author. As of this writing, Bill Gates' net worth is $114 billion. Over much of the last 20 years, Bill Gates has been the richest person in the world. He dropped to the second richest person in the world in July 2017 when he was overtaken by Amazon founder Jeff Bezos. Today he is consistently one of the five richest people on the planet.

As you probably know, Bill Gates co-founded the software company Microsoft with Paul Allen and is known as one of the pioneering entrepreneurs of the personal computer revolution. Today he owns less than 1.3% of Microsoft. He has sold tens of billions of dollars worth of Microsoft shares over the years. The proceeds of his sales have funded Cascade Investment LLC, the vehicle Gates uses to invest in hundreds of other companies. 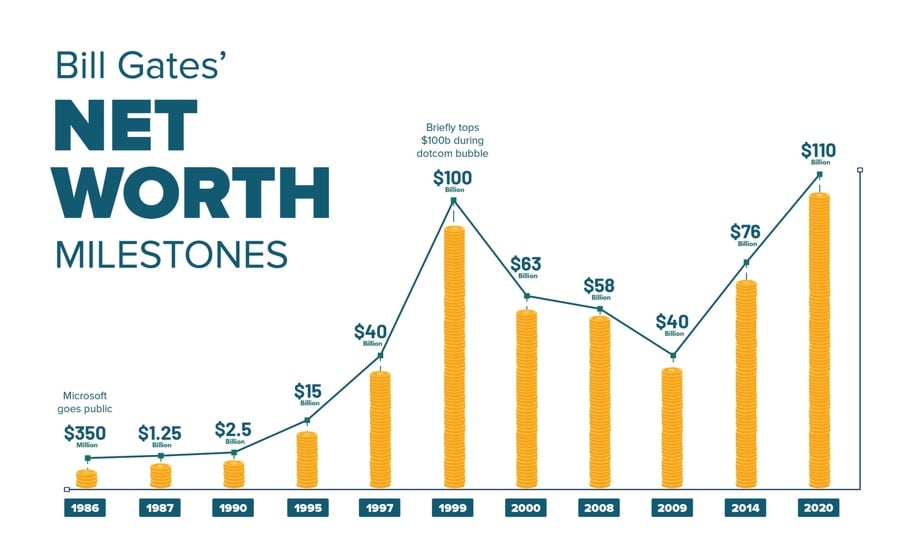 William Henry Gates III was born on October 28, 1955, in Seattle, Washington. Gates was bullied as a child. He preferred to stay in his room where he would shout "I'm thinking" when his mother asked what he was doing. When he was 13, he enrolled in the private Lakeside prep school and he wrote his first software program. He was in eighth grade during his first year at Lakeside and the school's Mother's Club used proceeds from a fundraiser to buy a Teletype Model 33 ASR terminal and time on a GE computer for the school's students. Gates became interested in programming the GE computer in BASIC. He wrote his first program — a tic-tac-toe game, on this computer. Players played the game against the computer. Eventually, Gates and his friends Paul Allen, Ric Weiland, and Kent Evans were banned from using the school's computer after they were caught exploiting bugs in the operating system to get free time on the machine. The four students formed the Lakeside Programmers Club to make money.

When their ban was over, the boys offered to look for bugs in the software in exchange for extra time on the computer. Gates began studying code to the programs that ran on the computer including Fortran, Lisp, and machine language. In 1971, a Lakeside teacher asked Gates and Evans to automate the school's class-scheduling system. The friends wrote software with one twist–Gates changed the code so that he was in classes with a higher number of interesting girls. Gates and Evans wanted to have the new system up and running by senior year. Then, at the end of their junior year, Evans was killed in a mountain climbing accident. Gates turned to Allen to help him finish the project for Lakeside.

During their senior year, Gates and Allen formed a company called Traf-O-Data and made traffic counters on the Intel 8008 processer. He graduated from Lakeside School in 1973 and enrolled at Harvard in the fall of 1973. At Harvard, Gates took math and graduate-level computer science classes. He met Steve Ballmer at Harvard. Gates dropped out of college at the end of his sophomore year.

With the release of the MITS Altair 8800 based on the Intel 8080 CPU, Gates and Paul Allen saw this as the opening they needed to create their own computer software company. The creators of the new microcomputer, Micro Instrumentation and Telemetry Systems (MITS), formed a partnership with Gates and Allen using their Altair emulator that ran on a minicomputer, and then the BASIC interpreter. The trade name Microsoft was registered on November 26, 1976. During the first five years of the Microsoft company, Gates personally reviewed every line of code the company shipped, often rewriting code as needed. On November 20, 1985, Microsoft launched its first retail version of Microsoft Windows.

Gates announced on June 15, 2006, that he would transition out of his day-to-day role at Microsoft over the next two years in order to dedicate more time to philanthropy.

On March 13, 2020, Gates announced he would step down as Microsoft's Chairman. 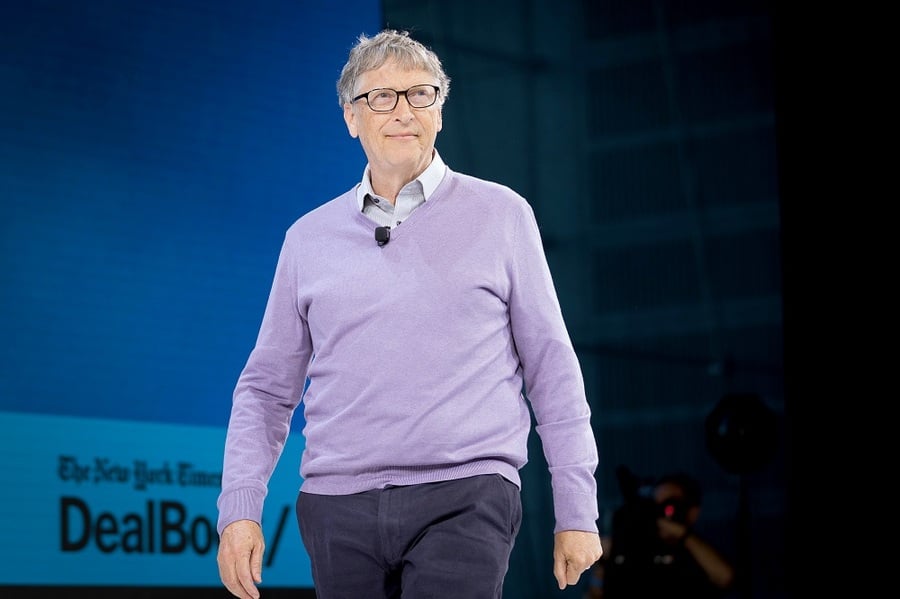 *** At one very brief point in 1999, his net worth topped $100 billion. After adjusting for inflation, that was the same as being worth $153 billion today.

In 1987, Melinda French went to work in the product development division of Microsoft. At some point, she and Bill were seated next to each other at a work dinner. They hit it off and Bill was soon calling Melinda to ask her out. Melinda eventually rose to the position of General Manager of Information Products. She stayed with Microsoft until 1996.

Bill and Melinda married on a golf course on the Hawaiian island of Lanai on January 1, 1994. They have three children; Phoebe Adele, Rory John, and Jennifer Katharine.

Gates purchased the Codex Leicester, a collection of scientific writings by Leonardo da Vinci, for $30.8 million at an auction in 1994.

Gates and his wife combined three family foundations to create the charitable Bill & Melinda Gates Foundation in 2000, the largest transparently operated charitable foundation in the world.

On December 9, 2010, Bill and Melinda Gates and investor Warren Buffett each signed a commitment they called the Giving Pledge, which is a commitment by all three to donate at least half of their wealth, over the course of time, to charity.

Bill Gates has sold at least $40 billion in Microsoft stock and collected over $12 billion in dividends since the company's IPO in 1986. He used that money to create the holding company Cascade Investment which has continued to grow and includes investments in companies such as Canadian National Railway and AutoNation. Gates is quite a philanthropist and donated a $3.3 billion payout he received in 2004 to his Bill & Melinda Gates Foundation. He still has a 1.3 percent stake in Microsoft.

Bill Gates family owns a number of impressive properties around the US. He likely owns residences abroad as well, though less is known about these purchases.

In Washington, the Bill Gates owns an unbelievably amazing mansion nicknamed "Xanadu 2.0". After acquiring the lake-front property in 1988 for $2 million, Bill spent seven years and $63 million constructing what became one of the most impressive private residence in the world. He also spent $14 million acquiring neighboring properties to create more privacy.

The house is considered a modern "Pacific lodge" style design, with many classic and high-tech amenities.  To build Xanadu 2.0, all timber and woodwork was flawless, with acoustics being a priority. More than seven types of stone were used. All flooring is heated, including walkways and even the driveway. There were 300 workers total to complete the home, with one hundred being just electricians.

Located on the side of a hill overlooking Lake Washington in Medina, Washington, the main house alone is 66,000 square-feet. The estate has a 60-foot swimming pool with an underwater music system,  a 2,500 square-foot gym and a 1,000 square-foot dining room six kitchens and a dining hall that can seat 200 people. The room has a wall made of 24 40-inch video screens that combine into one giant image. He also has a more intimate dining room at 1,000 square feet that can sit 24 people by a fireplace.

The home features all kinds of automation, with over 52 miles of optic cables. Family members and visitors are set up with a microchip tag that can control setting for each room they walk into, controlling lighting, heating, music and even your preference of art on digital displays. All rooms also have their own touch-pad to control every aspect of the room.

Intensive home security is present, with hidden cameras and floor sensors everywhere. There are no visible electric outlets and every door handle was custom-made, at a cost $2,000 a piece. Some interior passageway doors weigh over 800 lbs, but are balanced for easy opening.

Bill Gates has several interesting areas to his home. He has a domed library, which has two secret bookcases, with one hiding a bar.

The pool house that is 3,900 square feet with a 17 foot by 60 foot swimming pool. The pool is also outfitted with an underwater sound system.

The home has one underground parking lot which measures 6,300 square feet that can hold 10 cars and two above-ground garages.

Gates is an avid reader, and the ceiling of his large home library is engraved with a quotation from The Great Gatsby. The library features priceless works, including pieces by Da Vinci.

The annual property taxes on the mansion are reported to be $1.063 million, on an assessed value of $150 million.

Rancho Santa Fe, Ca: In October 2014 the Gates family paid $18 million for a 228-acre ranch property in Rancho Sante Fe, California (near San Diego). They acquired the property from weight loss tycoon Jenny Craig. The property, dubbed "Rancho Paseana", is a horse ranch. Gates' daughter Jennifer is an avid rider. The property has a racetrack, orchard, five barns and even a suite for a full-time veterinarian.

Del Mar, Ca: In April 2020, Bill and Melinda paid $43 million for a stunning oceanfront mansion in Del Mar, California, roughly 15 minutes from their Rancho Santa Fe ranch. They bought the home from the widow of the late oil billionaire/investor T. Boone Pickens.

Wellington, Florida: In 2013 Gates paid $8.7 million for a second horse ranch, this one in Wellington, Florida. The family had rented the mansion on several previous occasions when in town for Jennifer Gates' competitions. They liked the house so much, they bought it.

Cody, Wy: In 2009 Gates bought a 492-acre ranch in Cody, Wyoming, for an undisclosed price. The ranch, which was once owned by William "Buffalo Bill" Cody, was initially listed for $12 million. It was listed at $8.9 million just before Bill became the owner. The ranch has only had three owners in roughly 150 years.

Commercial Properties: Through his investment fund Cascade, Gates owns interests in several prominent hotels. He owns part of the Charles Hotel in Cambridge, Massachusetts. He owns around half of all Four Seasons hotels around the world. He plus a group of investors own the Ritz Carlton in San Francisco.

Bill Gates has a net worth of $114 billion. As of this writing that makes him one of the richest people in the world. Since Microsoft's 1986 IPO, Bill has seen his net worth grow from $250 million to well over $100 billion. In 1999, at the peak of the dotcom boom, Gates' fortune briefly topped $99 billion. After adjusting for inflation, that's the same as around $153 billion in today's dollars. 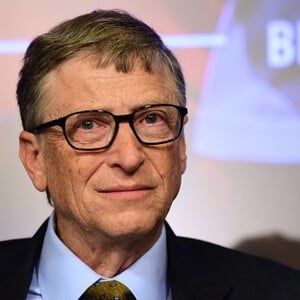