Betsy DeVos net worth: Betsy DeVos is an American politician who has a net worth of $2 billion. Betsy DeVos was born in Holland, Michigan in January 1958. She is probably most famous for being appointed United States Secretary of Education in 2017 by President Donald Trump. Her wealth comes from two sources: First, her father Edgar founded an automotive parts company that eventually grew into a multi-billion-dollar empire. And second, she married Dick Devos, whose father Richard founded Amway which eventually grew into a multi-billion-dollar empire.

DeVos is a Republican who graduated from Calvin College. She served as the Chair of the Michigan Republican Party from 1996 to 2000 and again from 2003 to 2005. DeVos has worked as an activist, businesswoman, and political campaign contributor. She served as Republican National Committeewoman for Michigan from 1992 to 1997. She has been a chairwoman of the board for Alliance for School Choice and Action Institute. DeVos has also been the head of the All Children Matter PAC. Her husband Dick DeVos is the former CEO of Amway. Dick's father, Richard Richard DeVos was the co-founder of multi-level-marketing company Amway. Richard DeVos was worth $6 billion at the time of his death in September 2018. But Betsy is no pauper herself even outside of marriage. In 1976, Betsy's father Edgar patented a simple, yet innovative, sun visor with a built-in mirror for vehicles. That simple patent paid the DeVos family a royalty every time a car was sold with one. At their peak in the mid 1990s, The Prince Company manufactured 20,000 sun visors every day. In 1996, the family sold the business to Johnson Controls for $1.3 billion in cash. Betsy's brother Erik Prince is the founder of Blackwater USA. Combined, her immediate family is worth more than $5 billion. DeVos became the first cabinet nominee to be confirmed with a tie vote in Senate history in 2017. 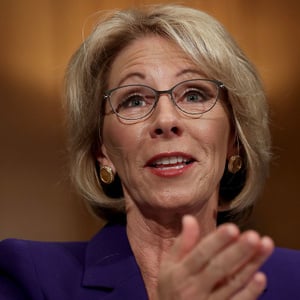