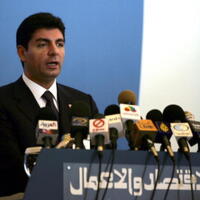 Bahaa Hariri net worth: Bahaa Hariri is a Lebanese billionaire who has a net worth of $2.3 billion. Bahaa Hariri is the eldest son of former Lebanese Prime Minister Rafik Hariri. Bahaa decided to separate from the family business Saudi Oger, Ltd., leaving it to his brother Saad in 2008. Ever since, he has focused on his own personal interests. Thus, he invested heavily in Jordan, entering into partnership with the Jordanian government via his real estate holding company Horizon Group, which is building a new development in downtown Amman. However, the project that started back in 2004 was eventually stopped due to downturn in the real estate market. Apart from being the chairman of Al-Abdali Project in Jordan, Hariri inaugurated the Rafik Hariri Center for the Middle East at the Atlantic Council in 2011, having hopes it will focus on governance in Egypt.