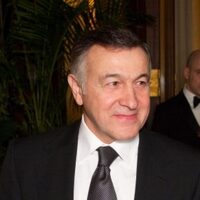 Aras Agalarov Net Worth: Aras Agalarov is an Azerbaijan-born Russian businessman, developer, public figure and author who has a net worth of $1.8 billion. Having derived most of his net worth from his real estate business, Agalarov is regarded to be one of the biggest and most notable developers in Russia, as well as the owner of the largest convention center in the country. Born on November 8, 1955 in Baku Azerbaijan, he attended Azerbaijan Polytechnical Institute. In 1998, he moved with his family to Moscow to set up the Crocus International, which primarily specializes in trade fairs. Eventually, the company became the largest trade-fair operators in the country which extended its operations in the retail business and property development. Today, Crocus Inter's portfolio includes the largest shopping center in Moscow, Crocus City Mall, the largest trade center in Russia on the out skirts of Moscow, Crocus Expo. Known as the unofficial spokesman of Russia's Azerbaijani diaspora, Aras Agalarov is a married man with two children.

Donald Trump connection: In July 2017 it was revealed that Aras and his popstar son Emin arranged a June 2016 meeting at Trump Tower that featured Donald Trump Jr., Jared Kushner, Paul Manafort and a Russian lawyer. The Trump and Agalarov families have been connected for years. Donald Sr. even appeared in a music video for Emin.