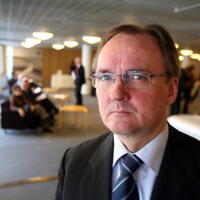 Antti Herlin net worth: Antti Herlin is a Finnish businessman who has a net worth of $3.2 billion dollars. Born in Kirkkonummi, Finland, Antti Herlin became Finland's only billionaire, managing the company his grandfather founded in the early 1920s. The KONE Corporation manufactures, installs, and maintains elevators and escalators, and has grown exponentially over the years. Antti Herlin took over as CEO in the mid-90s and increased the company's value appreciably, through a quick succession of acquisitions, mergers, and technological developments. After serving as CEO for ten years, he passed on the reins, though he still serves as Chairman. In addition to his involvement in KONE, he serves on the board of YIT, a construction firm based in Finland, and is chairman of Security Trading Oy. During the mid-2000s, he was investigated for insider trading, but was ultimately found to be innocent of all accusations. After launching his own investigation, he was unable to discover who had actually participated in the alleged activities.