How much is Andrew Forrest Worth?

Andrew Forrest net worth: Andrew Forrest is a Western Australian mining magnate who has a net worth of $1 billion. Andrew Forrest is currently the non-executive chairman of the world's fourth largest iron ore producer Fortescue Metals Group (FMG). He joined Fortescue in April 2003, when he served as a driving force regarding the creation of the Pilbara Iron Ore and Infrastructure Project. At the time, he also was the founding non-executive Chairman of the Company, two years later becoming the Chief Executive Officer. Then in August 2011, he resumed the role of non-executive Chairman. In addition to the above, Mr. Forrest is also Non-Executive Chairman of Poseidon Nickel Limited as well as Chairman of the West Australian charity, The Australian Children's Trust. Before assuming these current positions, he served as Chief Executive Officer and Deputy Chairman of Anaconda Nickel Ltd (now Minara Resources Ltd), Chairman of the Murrin Murrin Joint Venture, Director of the West Australian Chamber of Minerals and Energy, Chairman of Athletics Australia, Chairman of Moly Mines Ltd and Chairman of Siberia Mining Corporation Ltd. Andrew Forrest started to build his extensive professional career, after he graduated from the University of Western Australia, where he studied a double major in economics and politics. Furthermore, he is a substantial supporter and official public Ambassador of the non-profit organization, Australian Indigenous Education Foundation. In 2010, Forbes named Forrest the richest person in Australia with an estimated wealth of US $5.3 billions, even though by 2012 had slipped to the third richest person. As for his private life, Forest is married with three children, currently living in his hometown Perth, Australia. 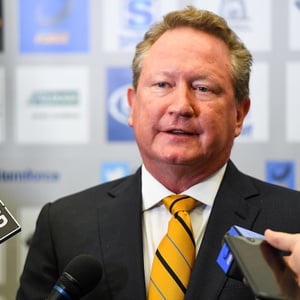