How much is Ray Muzyka Worth?

Ray Muzyka net worth and salary: Ray Muzyka is a Canadian businessman who has a net worth of $90 million dollars. Born in Edmonton, Alberta, Canada, Ray Muzyka graduated from Old Scona Academic High School, and earned a medical degree from the University of Alberta. Instead of focusing on medicine post-graduation, however, he co-founded BioWare, with classmate Greg Zeschuck. The company became part of Electronic Arts in 2008, and he went on to become the Senior Vice President and General Manager for Electronic Arts. BioWare, with Muzyka and Zeschuck serving as co-executive producers, developed such popular games as "Shattered Steel", "Baldur's Gate", the "Neverwinter Nights" series, "Mass Effect", "Jade Empire", "Sonic Chronicles: The Dark Brotherhood", "Dragon Age: Origins", "Mass Effect 2", and they partnered with LucasArts to produce "Star Wars: Knights of the Old Republic" and "Star Wars: The Old Republic". In addition to his work at BioWare, he is also Director and Co-Chairman of CodeBaby Corporation and an avid poker player. 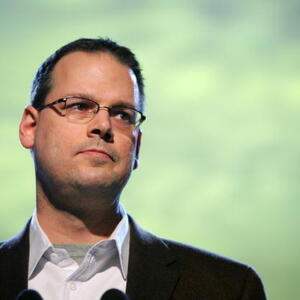