Yoshiki net worth: Yoshiki is a Japanese musician, songwriter, record producer, and composer who has a net worth of $50 million. Yoshiki was born in Tateyama, Chiba, Japan in November 1965. Yoshiki is best known for being the leader and the co-founder of the heavy metal band X Japan. He is the band's drummer, pianist, and main songwriter.

The group was part of the independent record label Exstasy Records which Yoshiki founded. He formed his solo project Violet UK in 2000 and the rock super group S.K.I.N. in 2007. As a solo artist Yoshiki released the classical studio albums Eternal Melody in 1993 and Yoshiki Classical in 2013. Yoshiki composed and performed a classical tune at the request of the Japanese government for the 10th anniversary of Emperor Akihito's enthronement in 1999. Yoshiki composed the original music theme for the 69th Golden Globe Awards. X Japan had a breakthrough in 1989 when their second album Blue Blood was released and the album hit #6 on the Irocon chart and stayed on the chart for over 100 weeks. They won the Grand Prix New Artist of the Year award in 1990 at the Japan Gold Disc Awards. Their 1991 album Jealousy sold a million copies and the band was the first heavy metal band to play at the Tokyo Dome. 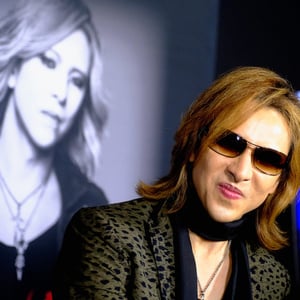