How much is Tom Kapinos Worth?

Tom Kapinos Net Worth: Tom Kapinos is an American television executive producer and screenwriter who has a net worth of $18 million dollars. Tom Kapinos was born July 12, 1969 in Levittown, New York. He is best known for his creation of the television series Californication. After graduating high school, Kapinos moved from New York to California in the mid-1990s where he worked in Los Angeles for Creative Artists Agency (CAA) as a script reader until Fox Studios purchased his first screenplay, The Virgin Mary, in 1999. Jennifer Aniston was to play the title role, but the film never made it to the screen due to script rewrites delaying production past Aniston's availability from shooting her TV series Friends. When news of the interest in the screenplay reached Dawson's Creek producers, they offered Kapinos a job later that same year. He began a career in television in 1999 as a screenwriter and eventually executive producer on drama series Dawson's Creek, (of which he reportedly says his time on the show was like a four- year boot camp, but also "a guilty pleasure for me"). Kapinos then moved to his own series, Californication, a dramedy for which he currently serves as both executive producer and chief screenwriter. 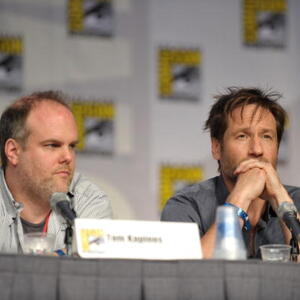