Thom Beers net worth and salary: Thom Beers is an American television producer and narrator as well as a voice over artist who has a net worth of $25 million. Thom Beers has earned his net worth as a former producer and executive with Turner Broadcasting and Paramount Syndicated Television.

Beers has produced over 40 television series since the mid 1990s. Most of these shows were produced by his own company, which he started in 1999 called Original Productions. Thom is the CEO and Executive Producer at Original Productions, some of his credits include; Deadliest Catch, Lobster Wars, Monster Garage, Monster House, and Plastic Surgery: Before and After. These popular shows are aired on the Discovery Channel family of networks, he also is the narrator for several of the channel series such as; Swords: Life on the Line, and Verminators. Some of his other narration credits include; Ice Road Truckers aired on the History Channel, Ax Men and as of 2010 he was the executive producer and narrator of Storage Wars on A&E. He is also the narrator for truTV's "dangerous occupation" series: which includes; Black Gold, which is a documentary about oil drillers, as well as the executive producer and narrator for Tornado Road, a mini-series which airs on The Weather Channel. He is married to the president of Amygdala Music Leslie Beers they have one son named Max. Amygdala Music produces all the music for Original Productions shows as well as licensing music for other production companies. Since 2012 he has executive produced the TV series Bering Sea Gold. 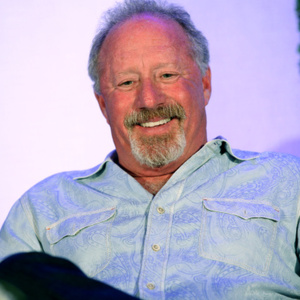