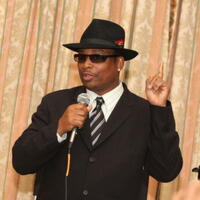 Terry Lewis Net Worth: Terry Lewis is an American R&B songwriter and record producer who has a net worth of $50 million. Terry Lewis was born in November 24, 1956. He is best known for being part of a songwriter and record production team with Jimmy Jam. The duo have had great success and many artists including Janet Jackson. They were inducted into The SoulMusic Hall of Fame at SoulMusic.com in 2012 and have written 31 top 10 hits in the United Kingdom and 41 in the United States. The duo formed the band Flyte Tyme which changed to the Time. The band opened for Prince on tour and recorded three albums. They founded Perspective Records and have worked with artists including TLC, Herb Alpert, Michael Jackson, Boyz II Men, Usher, Mariah Carey, Mary J. Blige, Spice Girls, George Michael, Rod Stewart, Melanie B, Gwen Stefani, and New Edition. The pair opened Flyte Tyme West recording studio in Santa Monica, California in 2005. They won a Grammy Award for the Yolanda Adams song "Be Blessed". They produced the Chaka Khan album Funk This which won two Grammy Awards. They have more Billboard #1s than any other songwriter and production team in history. Lewis has been featured on over 90 soundtracks. Their work on the film Poetic Justice earned the duo nominations for an Academy Award and a Golden Globe. Lewis and Jam were awarded a Star on the Hollywood Walk of Fame in 1993 at 6363 Hollywood Blvd.