What is Steven Mnuchin's net worth?

Steven Mnuchin is an American banker, film producer, and hedge fund manager who has a net worth of $400 million. He also served as the 77th United States Secretary of the Treasury under President Donald Trump. He was confirmed by the United States Senate in February 2017 and served throughout the remainder of Trump's term, through January 20, 2021.

A 2020 New York Magazine article stated that: "Mnuchin wasn't born on third base so much as a few inches to the left of home plate."

His father Robert Mnuchin worked at Goldman Sachs for 33 years, starting in 1957. He was named a General Partner in 1967 and by the 1990s was a member of the management committee and ran Goldman's equities division. Robert is also a notable art dealer and collector. He opened a gallery called C & M Arts in 1992 with LA-based dealer James Corcoran. The gallery was renamed L&M Arts in 2005 when he became partners with Dominique Levy. Though she left the partnership in 2013.

In May 2019, Robert's gallery facilitated the purchase of a 1986 Jeff Koons stainless steel "Rabbit" which sold at auction for $91 million. Robert was the broker for the buyer, who was eventually revealed to be billionaire/Mets owner Steven A. Cohen.

Steven's mother was a longtime investor with Bernie Madoff. After his mother died in 2005, Steven liquidated her Madoff accounts, receiving roughly $3.2 million in gains. When Madoff was later revealed to be a giant fraud, there was a question as to whether Steven and his siblings would have to re-pay the gains. Ultimately a court ruled that the victim's trust could only claw-back money that was cashed-out within two years of Madoff's December 2008 bankruptcy.

Steven attended Yale where he was a member of the Skull & Bones secret society. He reportedly drove a brand new Porsche from freshman year on.

After graduating from Yale in 1985, Steven Mnuchin went on to work at Goldman Sachs. He stayed there for 17 years. He served as the bank's Chief Information Officer before leaving to found several hedge funds. At Goldman Sachs he also served as Head of the Mortgage Securities Department, Executive Vice President, and more.

Mnuchin purchased IndyMac during the financial crisis of 2007-08. He changed the company's name to OneWest Bank before selling it to CIT Group in 2015.

In his latest financial disclosure while serving as Secretary of the Treasury, Steven Mnuchin estimated that his total assets were worth around $400 million. The disclosure showed that he owned roughly $95 million worth of real estate and a $150 million stake in bank CIT Group. 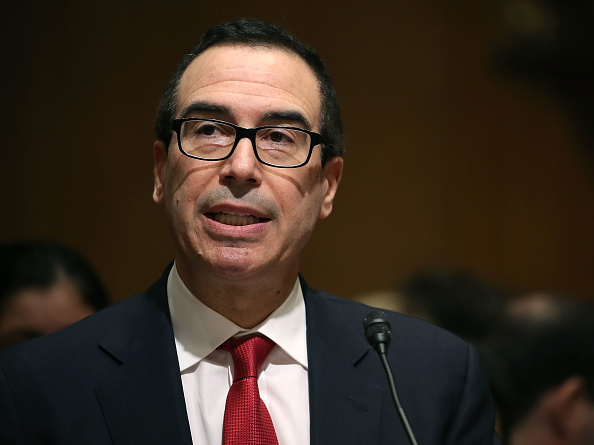 Mnuchin served as the national finance chairman for Trump's 2016 presidential campaign. He was nominated by Trump to be Secretary of the Treasury, passing the Senate's confirmation vote in February 2017.

Mnuchin remained in office throughout the remainder of Trump's presidency.

Mnuchin co-founded RatPac-Dune Entertainment in 2004. Through this partnership he executive produced many films including The Lego Movie, Edge of Tomorrow, Get Hard, Mad Max: Fury Road, Vacation, Black Mass, The Intern, Batman vs Superman: Dawn of Justice, Central Intelligence, Wonder Woman, and more.

Steven has been married several times. From 1992 to 1999 he was married to Kathryn Leigh McCarver. The year their divorce was finalized he married Heather deForest Crosby. They had three children before divorcing in 2014.

Steven met actress Louise Linton at a wedding in Los Angeles in 2013. They dated for two years before becoming engaged in 2015. They married in 2017. Mike Pence, who was Vice President at the time, presided over the marriage ceremony. Steven is 18 years older than Louise.

In 2017, ahead of starting as Secretary of State, Mnuchin paid $12.6 million for a home in Washington D.C.. 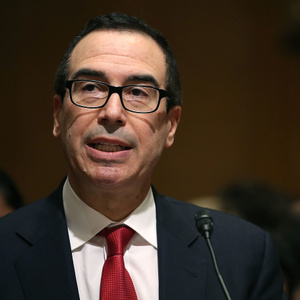