Steve Sabol Net Worth: Steve Sabol was an American filmmaker who had a net worth of $30 million. Steve Sabol was born October 2, 1942 in Moorestown, New Jersey. He was the president and cofounder of NFL Films, along with his father Ed. He was also a widely exhibited visual artist.

Steve Sabol began working at NFL Films as a cameraman alongside his father Ed Sabol after graduation. He started in the filming industry when his father got the rights to the 1962 NFL Championship Game, played in Yankee Stadium on December 30 of that year. The company eventually grew into NFL Films, with Sabol serving mainly as a cameraman, editor and writer in the '60s and '70s. When ESPN was founded 1979, they soon signed NFL Films as a production company and Sabol became an on-air personality in the 1980s. As president of the most honored filmmaker in sports; Sabol continued to be the artistic vision behind the studio that revolutionized the way America watches football. Sabol and his father, who was elected to the Pro Football Hall of Fame on February 5, 2011, were honored in 2003 with the Lifetime Achievement Emmy from the National Academy of Television Arts and Sciences for "revolutionizing the way America watches football and setting the standard in sports filmmaking. While NFL Films has won over 100 Emmys, Sabol himself has received 35 of those Emmys for writing, cinematography, editing, directing and producing. No one else in all of television has earned as many Emmys in as many different categories to date. Sabol is the author of the poem The Autumn Wind, later adopted by the Oakland Raiders as an unofficial anthem. On September 18, 2012, Steve Sabol died of brain cancer in Moorestown, New Jersey, 18 months after being diagnosed with an inoperable brain tumor in March of 2011. He died two weeks before his 70th birthday and a week after his father's (Ed Sabol) 96th.

He was honored before every NFL game in Week 3 with a video tribute. The NFL paid tribute to his life and contributions to the league, at a ceremony on February 12, 2013, in Philadelphia. 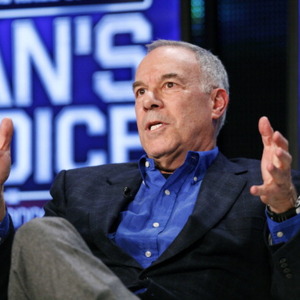