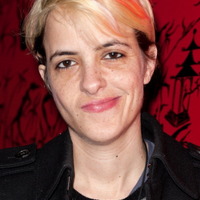 Samantha Ronson net worth: Samantha Ronson is a British singer, songwriter, and DJ who has a net worth of $6 million. Born in London, England, Samantha Ronson moved to New York with her mother and stepfather when she was six. She attended New York University, and spent a great deal of time in New York's club scene. She was invited to DJ at one of the clubs she visited on a regular basis, and she quickly made a name for herself. Since then, she has gone on to DJ at some of the most high-profile events around the world, including MTV's New Year's Eve Show, the Superbowl, the Cannes and Sundance Film Festivals, and for parties hosted by a range of celebrities including Stevie Wonder, Ellen DeGeneres, and Jay-Z. She became the first artist signed by Roc-A-Fella Records in 2002, but the album she wrote and recorded was never released. She produced and released her second full-length album, "Chasing the Reds", independently, in 2011.