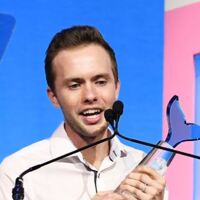 Ryland Adams net worth: Ryland Adams is an American social media personality, writer, producer, and actor who has a net worth of $1 million. Ryland Adams was born in Calabasas, California in May 1991. He is best known for his self-titled YouTube channel that he started in 2010. His channel has more than 3.8 million subscribers and more than 295 million total views. He became the producer and an on-air host for the online pop culture media company Clevver in 2014 but left in 2017. In 2016 he became more famous after he began dating YouTuber Shane Dawson. Ryland Adams is known for his YouTube Vlogs and in 2019 he was nominated for the Short Award Vlogger of the Year. Adams has appeared in the web series Clevver News from 2013 to 2017, Throwback from 2015 to 2016, The Truth About Tanacon in 2018, The Secret World of Jeffree Star in 2018, The Mind of Jake Paul in 2018, and Conspiracy Theories with Shane Dawson in 2019.