What is Robert Kirkman's Net Worth and Salary?

Robert Kirkman was born in Lexington, Kentucky, on November 30, 1978. His parents raised him in Cynthiana, Kentucky. As a child he was a huge fan of movies, primarily zombie movies like "Night of the Living Dead."

Kirkman's first work in the world of comic books was the superhero parody comic book "Battle Pope" (2000). He co-created the comic with artist Tony Moore, and they self-published it under the label Funk-O-Tron. This comic book was later adapted by Spike TV into a series of 8 animated webisodes in 2008. After published "Battle Pope" in 2000, Kirkman's next project was to work on a SuperPatriot miniseries for Image Comics. He and artist Cory Walker were hired to work on the miniseries. It was while working on that project that Kirkman teamed up with E.J. Su to make the series "Tech Jacket" (2002), also published with Image. "Tech Jacket" ran for six issues.

In 2003, Kirkman once again teamed up with Cory Walker, and the duo created the comic "Invincible" for Image Comics's new superhero line. Walker was eventually replaced by Ryan Ottley, after he struggled to meet deadlines.

It was not long after launching "Invincible" that Kirkman and previous collaborator Tony Moore partnered up again to work on their new comic series, "The Walking Dead." Launched in 2003, The Walking Dead was a huge success, and received the 2007 and 2010 Eisner Award for Best Continuing Series. It ran for 193 issues, ending in 2019.

In addition to being an incredibly popular comic book series, in 2010 "The Walking Dead" was adapted by AMC into a television series of the same name. The television series eventually aired 177 episodes over 11 seasons and was nominated for several awards, such as the Golden Globe Award for Best Television Series – Drama. The series loosely followed the events and occurrences of the comic book. Kirkman was one of the show's executive producers, and wrote a number of episodes for the series, including the episode "Vatos" in season one, "Made to Suffer" in season three and "Strangers" in season five. 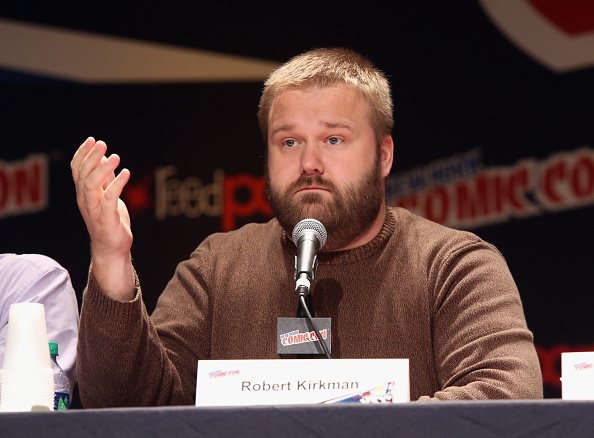 Kirkman has also worked as a writer for Marvel. Marvel first fired him to write a revival of the original Sleepwalker series from the 1990s. The project ended up being canceled being it was published, but some of its contents can be seen in the publication "Epic Anthology No. 1" (2004). Although his first project for Marvel was scrapped, Kirkman remained with the company and helped write other things such as the "Avengers Disassembled" issues of the series "Captain America", volume 4; one-shot publications for "Marvel Knights 2099" (2004); "Jubilee"; and "Marvel Team-Up" (2005-2007). Additionally, he worked on the series "Ultimate X-Men" for two years, and also worked on the miniseries "Irredeemable Ant-Man" (2006-2007). His association with Marvel ended in July 2008, when Image Comics made Kirkman a partner. He is actually the only partner (out of five) to not be a co-founder of the label.

In July 2018, Kirkman purchased a $7.25 million compound in Encino, California. He is married, and he and his wife have one son together, Peter Parker Kirkman, born in April 2006. In 2020, Kirkman was awarded a special award at the Angouleme International Comics Festival for his overall achievement in the industry. He also won the Inkpot Award in 2012.