How much is Rico Love Worth?

Rico Love Net Worth: Rico Love is an American record producer and singer-songwriter who has a net worth of $14 million dollars. A rap artist, singer-songwriter, and producer, Rico Love has written and produced hit songs for such artists as Beyonce, Usher, and Nelly, and received a Grammy Award for his work on Beyonce's album, "I Am… Sasha Fierce". Born in New Orleans, Louisiana on December 3, 1982, Love's birth name is Richard Preston Butler, Jr. He has been active in the music industry since 2003 and is best known for writing and producing popular songs such as "There Goes My Baby" by Usher, "Just a Dream" by Nelly, and "Sweet Dreams" by Beyonce. He specializes in hip hop, R&B, pop, and dance music and has been affiliated with Division1 Records, a branch of Interscope. Love grew up in Milwaukee, Wisconsin and Harlem in New York. He studied at Florida A&M University and spent much of his time in Atlanta, Georgia where he was introduced to various producers and the members of Jagged Edge. He is currently married to Robin Thompson and lives in Miami, Florida with their son, Carys Preston. Love has also had solo success and collaborated with Usher, Juelz Santana, Jamie Foxx, Fat Joe, Juvenile, and Paul Wall. He recorded an album titled The 5th Element but neglected to release it. He was nominated in 2009 for Album of the Year at the Grammys for his work on Beyonce's I Am… Sasha Fierce, and he held three different ranks as Hip-Hop Songwriter, Hip-Hop Producer, and Hip-Hop Publisher of the Year via Billboard in 2010. 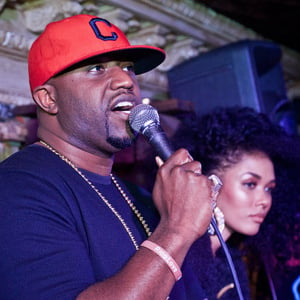