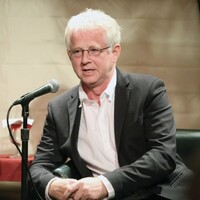 Richard Curtis Net Worth: Richard Curtis is an English screenwriter, actor, producer, and director who has a net worth of $30 million dollars. Born in Wellington, New Zealand, in 1956, Richard Whalley Anthony Curtis earned his English language and literature degree from Christ Church, Oxford, and soon began working as an entertainment writer. He started out on BBC Radio 3's "The Atkinson People" in the late '70s before transitioning to on-screen comedy writing. Since then, he has penned the "Blackadder" series, the "Mr. Bean" series, romantic comedy "The Tall Guy", and "Bernard the Genie". Curtis is perhaps best known for several films he wrote over the next few decades: "Four Weddings and a Funeral" starring Andie MacDowell and Hugh Grant, "Notting Hill", "Bridget Jones's Diary", and "Love Actually". Curtis earned his first Academy Award nomination for Best Original Screenplay for "Four Weddings and a Funeral". In 2004, he won his first BAFTA Award for Best Screenplay for "Love Actually" and he won a 2006 Emmy for Outstanding Made for Television Movie and Outstanding Writing for a Miniseries, Movie or a Dramatic Special for "The Girl in the Café". Curtis' other TV and film credits include "The Boat That Rocked", "About Time", "War Horse", "Bridget Jones: The Edge of Reason", "Robbie the Reindeer", and "The No. 1 Ladies' Detective Agency". His 2010 short film "No Pressure" was heavily protested for its violent scenes related to the climate change movement. Curtis is a founder for Make Poverty History and Comic Relief, and has been involved in Live 8 concerts. He lives in Notting Hall with partner Emma Freud and has four children.