Phil Rosenthal Net Worth: Phil Rosenthal is an American television producer and writer who has a net worth of $200 million. Phil is best known for creating, writing, and executive producing the hit sitcom "Everybody Loves Raymond." The show ran for almost ten years between 1996 and 2005, and it helped Rosenthal became a well-known figure within the entertainment industry. Since "Everybody Loves Raymond" came to a close, Phil branched out into food and travel documentaries. Today, he is probably best known for documentary series such as "I'll Have What Phil's Having" and "Somebody Feed Phil."

Early Life: Philip "Phil" Rosenthal was born on January 27th of 1960 in Queens, New York City. Raised in a Jewish family, Phil grew up mostly in New City, Rockland County, New York. During his high school years, Phil fell in love with the performing arts and joined the drama club. He also became active in the school's theatre department. After graduating in 1977, Rosenthal attended Hofstra University.

Career: After Phil graduated from college in 1981, he started working as an actor based in New York City. Eventually, he became more involved in the production side of the entertainment world, particularly in the realm of television. Early production credits came with series such as "Coach" and "Baby Talk."

Eventually, Phil created the most successful series of his career, "Everybody Loves Raymond." The show was possible in large part due to Rosenthal's partnership with Ray Romano, who co-produced the series. Based heavily on Ray's comedy material, the series also involved Phil's wife Monica Horan playing a lead character. Despite the creative freedom given to Ray Romano, Phil played a strong role behind the scenes and wrote or co-wrote about 20 episodes of the show.

Eventually, Rosenthal decided to call it quits after several cast members had voiced concerns about the future of the series. During his career, Phil has appeared in a number of projects as an actor. These include the films "Spanglish" and "The Simpsons Movie." Phil has also appeared in series like "Curb Your Enthusiasm," "30 Rock," and "The TV Set."

In 2006, Rosenthal published a book called "You're Lucky You're Funny: How Life Becomes a Sitcom." The book reveals the background behind the creation of "Everybody Loves Raymond." In the early 2000s, Phil co-wrote the 9/11 telethon "America: A Tribute to Heroes" and won a Peabody Award and an Emmy nomination for Outstanding Writing as a result. He also created a documentary about his efforts to export "Everybody Loves Raymond" to a Russian audience.

In 2015, Phil started appearing in the six-part documentary series "I'll Have What Phil's Having." The show followed Rosenthal around the world as he tried different foods. Although this show was not renewed for a second season, Phil later created a similar show called "Somebody Feed Phil," which aired on Netflix in 2018.

Real Estate: In 2007, it was reported that Phil and his wife were selling a property in the neighborhood of Hancock Park, Los Angeles. The residence features over 8,500 square feet of living space and six bedrooms. Other additions include a marble fireplace, a wet bar, and a wine cellar in the basement. The Rosenthals were aiming to sell this residence for $5.95 million back in 2007. 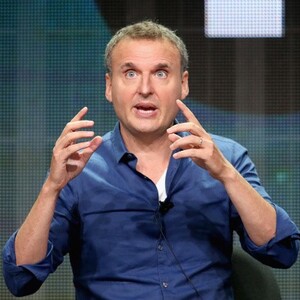