Noel Edmonds net worth: Noel Edmonds is an English broadcaster and executive who has a net worth of $100 million. He made his name as a DJ on the UK radio station BBC Radio 1 and is known for presenting light entertainment television programs including: Multi-Coloured Swap Shot, To of he Pops, The Late, Late Breakfast Show, and Telly Addicts.

Edmonds was born on December 22, 1948 in Essex as the son of a headmaster who worked in Hainault, Edmonds. He was offered a place at the University of Surrey but turned it down to work as a newsreader on Radio Luxembourg. In 1969, Edmonds moved to BBC Radio 1 where he began recording trailers for broadcasts and filling in for absent DJs. He went on to hatch an extremely successful career in both radio and television and has appeared in more than 15 radio and television shows throughout his lifetime. He currently presents for the Channel 4 game show, Deal or No Deal, and was formerly the host of the Sunday edition of Sky1's Are You Smarter than a Ten Year Old, as well as Noel's HQ. Edmonds was married to Gillian Slater in 1971, but after 11 years, the couple's marriage ended in divorce. In 1986, he married Helen Soby, and they had four daughters, Charlotte, Lorna, Olivia, and Alice. The family lived on an 855-acre estate near Devon but in 2004 the couple divorced after Soby had a highly-publicized extramarital affair. Years later he married his third wife, Liz Davies, who was a makeup artist on Deal or No Deal and the couple are still married today. Edmonds is a licensed helicopter pilot and was also the president of the British Horse Society in 2004 and 2007. He is a trustee of the Renewable Energy Foundation, an organization that is strongly opposed to wind farms, and he also coordinated the Heart of Devon campaign to provide information to famers who were affected by the foot and moth epidemic of 2001. 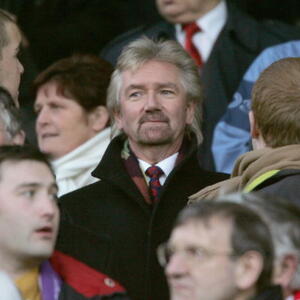