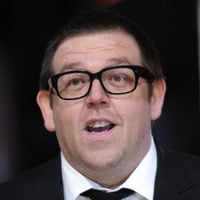 Nick Frost net worth: Nick Frost is a British comedian, actor, writer and producer who has a net worth of $16 million. Nick Frost has earned his net worth the old-fashioned way: By playing fat dopes on TV and in movies. And no one can say his net worth isn't deserved, since he's one of the best dopes in recent memory. His big break came on the BBC sitcom Spaced, written by good friend and recurring costar Simon Pegg. His first big exposure in the United States came from the cult classic "romantic comedy with zombies" Shaun of the Dead, also with Pegg. From there, he's been seen in several successful comedies, like the Paul, the action-comedy spoof Hot Fuzz, and the alien invasion comedy Attack the Block. He hasn't just been in straight comedies, though. He appeared in the horror double-feature Grindhouse from Quentin Tarantino and Robert Rodriguez, in the segment "Don't," directed by usual collaborator Edgar Wright. More recently he has appeared in movies such as The Huntsman: Winter's War.