Neal Baer Net Worth: Neal Baer is an American doctor, producer, and screenwriter who has a net worth of $20 million dollars. Neal Baer was born in 1955 and earned his political science degree from Colorado College. He went on to study at the AFI Conservatory for directing and later Harvard University, where he enrolled in a sociology graduate program.

Baer later went to Harvard Medical School, but found his show business career was interfering with the end of his degree program. He made it work by taking classes at UCLA and traveling back to Massachusetts when he wasn't filming. Baer eventually completed his medical degree and subsequent pediatrics internship, and now frequently writes on teen health for "Scholastic Magazine". He also used his medical knowledge to carve out a niche for himself in the entertainment industry. His TV career began as a writer on an ABC special focusing on STDs. Soon after, he wrote on drama "China Beach", earning a Writers Guild of America Award nod. Baer then began writing on the first season of the hit series "ER" before being promoted to story editor by season two. Three seasons in, Baer became a co-producer and was among several nominated for an Emmy Award for Outstanding Drama Series in 1997. A year later, he alone was nominated for an Emmy for Outstanding Writing for a Drama Series for a specific episode. By the seventh season, Baer had worked his way up to executive producer of "ER" and earned his fifth straight Emmy nod for Outstanding Drama Series. He left the show to join "Law & Order: Special Victims Unit", where he stayed for ten seasons. Since then, Baer has written for several unmade pilot episodes before landing on "Under the Dome" as an executive producer. In 2014, Baer came out publicly as gay. 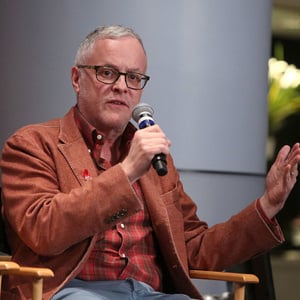