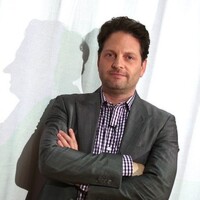 Max Handelman Net Worth: Max Handelman is an American film producer, blogger, writer, and fantasy football aficionado who has a net worth of $50 million dollars (a combined net worth with his wife, actress/producer Elizabeth Banks). Born in Portland, Oregon, in 1973, Max Handelman earned his bachelor's degree at the University of Pennsylvania and his master's degree in business administration at the University of California Los Angeles. He was part of the Alpha Epsilon Pi fraternity while in school. Handelman went to work as an investment banker before transitioning into a career in the news industry. He worked at News Corporation and was instrumental into the development of a fantasy football sector at Fox Sports. He wrote the book "Why Fantasy Football Matters: (And Our Lives Do Not)" with a friend, and routinely pens an online blog about the Portland Trail Blazers with his co-author. In 2007, Max and his wife, actress Elizabeth Banks, co-founded a production company called Brownstone Productions.  The couple met while in college at UPenn and wed in 2003. They have two children together via surrogacy: a son named Felix born in 2011 and a second son named Magnus born in 2012. Brownstone released its first feature film, 2009's "Surrogates" starring Bruce Willis, Radha Mitchell, and Rosamund Pike. Brownstone is the company behind the "Pitch Perfect" movie franchise which has been a huge international success.