Mark Rivera Net Worth: Mark Rivera is an American musician, musical director, and corporate entertainment provider who has a net worth of $20 million. Mark Rivera was born in Brooklyn, New York in 1952. He is best known for being a saxophonist and for his work with Billy Joel. Rivera plays alto, soprano, baritone, and tenor saxophones and also plays guitar, percussion, flute, keyboards, and provides vocals. He studied at Florello H. LaGuardia High School of Music & Art and Performing Arts in Manhattan. He was part of the band Tycoon in the 1970s. Rivera has worked with artists including Hall & Oates, Peter Gabriel, Joe Walsh, Simon & Garfunkel, Billy Ocean, and John Lennon. Rivera started playing with Billy Joel and his band in 1982. In 1995 he joined Ringo Starr & His All-Starr Band. Rivera's company The Mark Rivera Entertainment Group has produced events for IBM, HBO, Coldwell Banker, Merrill Lynch, AT&T, and many other groups. Rivera has endorses Yamaha, Kaman Music, Harman International, and Korg USA. 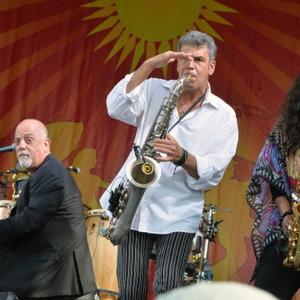