Marcelo Tinelli Net Worth: Marcelo Tinelli is an Argentine TV host, media producer and businessman who has a net worth of $40 million. Marcelo Hugo Tinelli was born in San Carlos de Bolivar, Buenos Aires Province, Argentina in April 1960. He is best known as the host of the television show ShowMatch.

He is one of the most well-known people in Argentine television. Marcelo first appeared in the series Badia y Cia in 1986. He is also an outspoken supporter of the San Lorenzo de Almagro football club, along with Pope Francis. He worked as a football sportscaster on Radio Rivadavia before going to TV. Tineli created the show Videomatch which featured jokes, bloopers, hidden cameras, and sports results. The program changed its format and name to Showmatch. Tinelli received the Golden Martin Fierro Award in 1999 for Videomatch. Marcelo created Ideas del Sur, a TV production company. The show has produced many popular shows. He also purchased the Radio Uno FM station and the Spanish Segunda Division football team CD Badajoz. As a producer he produced the 2004 TV mini-series Cold Blood. Marcelo has been married twice and has five children. 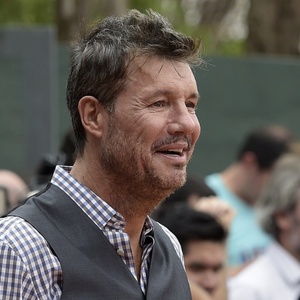