He was one of the pioneers of dub music in the 1970s. He has collaborated with or worked for several artists including Bob Marley and the Wailers, Max Romero, Junior Murvin, Adrian Sherwood, the Congos, Ari Up, the Beastie Boys, The Clash, and more. Lee "Scratch" Perry has released numerous albums over the years beginning with his debut The Upsetter in 1969. He built his The Black Ark studio in his backyard in 1973. He won a Grammy Award for Best Reggae Album in 2003 and was ranked #100 on the 100 Greatest Artists of All Time by Rolling Stone in 2004. 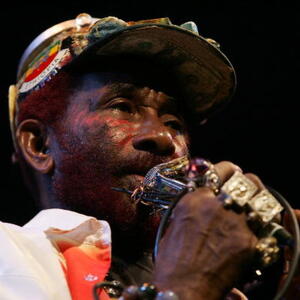