Lara Trump Net Worth: Lara Trump is an American television producer who is probably most-famous for being married to Eric Trump, President Donald Trump's third child. Lara Trump has a net worth of $10 million. Lara and Eric have been married since 2014 and they have two children together. Lara Trump is the host and producer of Trump Productions' Real News Update. She was a producer for the television series Inside Edition.

Lara Trump was born in Wilmington, North Carolina in October 1982. She is a Republican who studied at North Carolina State University and the French Culinary Institute. Trump worked for Inside Edition from 2012 to 2016 as a story coordinator and producer. She led the Trump-Pence Women's Empowerment Tour during the 2016 U.S. presidential campaign. She has also been an online producer and fundraiser for President Trump. In 2020 she became the senior consultant to Brad Parscale for Trump's re-election campaign. In 2020 it was revealed that Lara Trump received a salary $180 thousand per year through the company Parscale Strategy, a company associated with former campaign manager Brad Parscale. 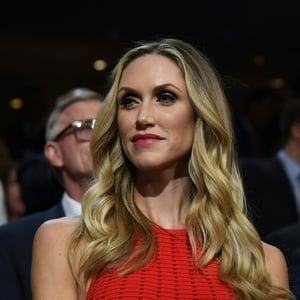