What is Kathleen Kennedy's Net Worth and Salary?

Kathleen Kennedy is an American film producer who has a net worth of $300 million. That is a combined net worth with her husband, fellow producer Frank Marshall. As of this writing, Kathleen is the second highest-grossing film producer in history with $13 billion in global box office revenue, and Frank is the sixth highest-grossing producer with $9.4 billion. The only producer who has grossed more than Kennedy is Marvel's Kevin Feige, whose movies have grossed $26 billion

Kathleen's most successful film is "Star Wars: The Force Awakens" (2015), which grossed $2.068 billion at the box office. The beloved 1982 film "E.T. the Extra-Terrestrial" was the first movie Kennedy produced, and she has gone on to serve as an executive producer on a number of high-profile projects, including "Back to the Future" (1985), "Jurassic Park" (1993), and "Schindler's List" (1993). Kennedy and Marshall formed The Kennedy/Marshall Company in 1992, but Kathleen left to become President of Lucasfilm in 2012. In 2019, Kennedy was named an honorary Commander of the Order of the British Empire.

Kathleen Kennedy was born June 5, 1953, in Berkeley, California. Her mother, Dione, was a former theatre actress, and her father, Donald, was an attorney and a judge. Kathleen has a twin sister, Connie, who is an executive producer with Profile Studios, and another sister, Dana, who was press secretary for former Washington governor Gary Locke. Kennedy attended Shasta High School, graduating in 1971, then enrolled at San Diego State University and majored in film and telecommunications. During her last year of college, Kathleen got a job at TV station KCST, where she served as a video editor, camera operator, and floor director before becoming news production coordinator. After KCST, she spent four years producing local talk show "You're On," then moved to Los Angeles and began working as an assistant to John Milius, who was serving as an executive producer of Steven Spielberg's "1941" at the time.

Kennedy's job with Milius led to Spielberg hiring her as an assistant. She received an "associate to Steven Spielberg" credit on 1981's "Raiders of the Lost Ark" and an associate producer credit on 1982's "Poltergeist" before serving as a producer on 1982's "E.T. the Extra-Terrestrial," which earned her a Best Picture Academy Award nomination and was the highest-grossing film in history until another Kennedy-produced film, "Jurassic Park," surpassed it in 1993. In 1981, Kathleen co-founded Amblin Entertainment with Spielberg and Frank Marshall, and three years later, she produced "Indiana Jones and the Temple of Doom" with Marshall and George Lucas and appeared as a dancer in the film's opening sequence. She served as an executive producer for the first time on 1984's "Gremlins," and she would work as an executive producer on a dozen more films by the end of the decade, including "The Goonies" (1985), "An American Tail" (1986), and "Who Framed Roger Rabbit" (1988). Kennedy also produced "The Color Purple" (1985), which received an Academy Award nomination for Best Picture. During the 1980s, Kathleen joined the National Student Film Institute's advisory board, a role that earned her a "Grimmy Award" in 1991; the organization also made her an Honorary Chairperson. 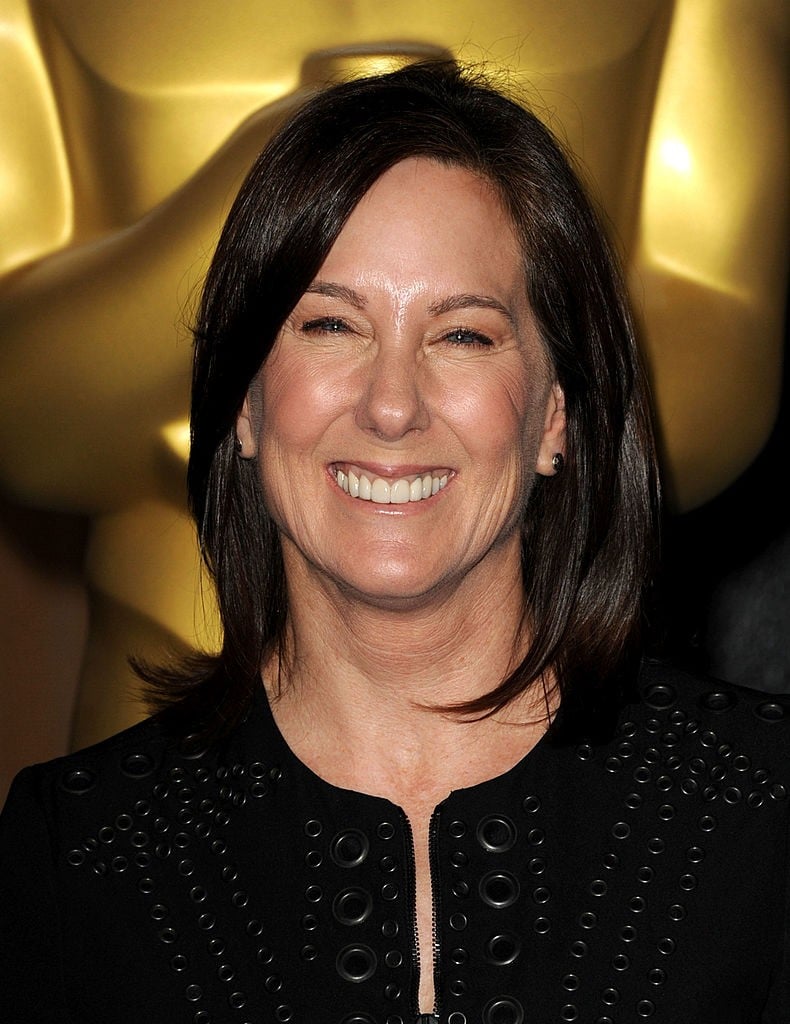 Kathleen married fellow producer Frank Marshall in 1987, and they have two daughters, Lily and Megan. Both Lily and Megan have been involved in the film industry, with Lily appearing in the 2009 movie "The Scenesters" and Megan guest-starring on the TV series "Blue's Clues" (1996) and "FaceSpace" (2012) and working as a lighting technician on the 2010 horror film "Insidious."

Kennedy was nominated for eight Academy Awards before being honored with the Irving G. Thalberg Memorial Award in 2019. In 2020, she was awarded the Academy Fellowship at the BAFTA Awards, and she has earned awards from the Academy of Science Fiction, Fantasy & Horror Films, Alliance of Women Film Journalists, Christopher Awards, CinEuphoria Awards, National Board of Review, Online Film & Television Association, PGA Awards (including the Lifetime Achievement Award in Motion Pictures, which she shared with Marshall), and the Women in Film Crystal Awards. In 2003, the American Cinema Editors honored Kathleen with the Golden Eddie Filmmaker of the Year Award, and she received the Will Rogers Motion Picture Pioneers Award at CinemaCon in 2013. In 2017, the Elle Women in Hollywood Awards named her Woman of the Year.

Over the years, Kathleen and Frank have owned a number of impressive properties in the Los Angeles area. In 2010, they sold their Pacific Palisades home to Tom Hanks and Rita Wilson for $26 million. In 2015, they paid $9.75 million for a two-acre property in Malibu and $14.925 million for a Sullivan Canyon home that formerly belonged to "Golden Girls" star Bea Arthur.