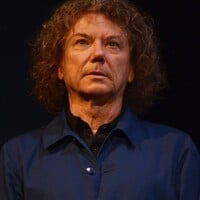 Jerry Harrison Net Worth: Jerry Harrison is an American musician, producer, and songwriter who has a net worth of $15 million. Jerry Harrison was born in Milwaukee, Wisconsin in February 1949. He is best known for being the keyboardist and guitarist of the band Talking Heads and being a member of the band The Modern Lovers. Jerry attended Harvard University where he played in The Modern Lovers from 1971 to 1974. He recorded their debut self-titled studio album in 1971 and 1972 but it was not released in 1976. He joined the Talking Heads after they had one single out. Talking Heads had four albums appear on the 500 Greatest Albums of All Time by Rolling Stone in 2003. The band was also ranked by Rolling Stone as the #100 Greatest Artist of All Time. The band released eight studio albums including five Gold, a Platinum, and a 2x Platinum. Their well-known singles include "Psycho Killer", "Take Me to the River", "Once in a Lifetime", "Burning Down the House", "And She Was", and "Wild Wild Life". Talking Heads were inducted into the Rock and Roll Hall of Fame in 2002. Harrison also released three solo studio albums. When Talking Heads broke up Jerry focused on producing. He has worked with bands like Violent Femmes, The BoDeans, Live, Crash Test Dummies, No Doubt, and Kenny Wayne Shepherd. He appeared in the 2006 movie The Darwin Awards.