Hank Green net worth: Hank Green is an American entrepreneur, musician, and vlogger who has a net worth of $12 million. Hank Green was born in Birmingham, Alabama in May 1980. Hank is known for his YouTube channel VlogBrothers with his brother John Green. Hank created EcoGeek, an online environmental technology blog.

Hank and John Green co-created the world's largest online video conference called VidCon. Hank is also involved in other YouTube channels such as SciShow, Crash Course, The Brain Scoop, The Lizzie Bennet Diaries, SciShow Space, Animal Wonders, GamesWithHank, and hankschannel. Green earned his Bachelor's degree at Eckerd College and Master's degree at the University of Montana. He released the studio album So Jokes in 2008 which reached #22 on the Billboard Top 25 revenue generating albums online. Green has since released the albums I'm So Bad at This: Live!, This Machine Pwns n00bs, Ellen Hardcastle, and Incongruent. His last album was released with his new band Hank Green and the Perfect Strangers in 2014. In 2008 he co-founded the record label DFTBA Records. Green created 2-D glasses in 2011 which let someone watch a 3-D movie in 2-D. 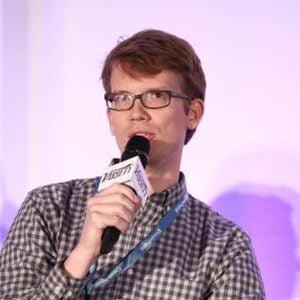