Emilio Estefan net worth: Emilio Estefan is a Cuban-American musician and producer who has a net worth of $500 million. That is a combined net worth with his highly-successful musician wife, Gloria Estefan. He is a producer, real estate developer and Emilio and Gloria own a number of businesses.

He was born in Santiago de Cuba, Cuba in 1953. Emilio Estefan, Jr. was born in Santiago de Cuba, Cuba in March 1953. He is known for being the husband of Gloria Estefan and was a member of the Miami Sound Machine. Emilio has produced The Latin Grammy's and The Hispanic Heritage Awards, as well as production for Showtime and HBO. He produced and directed the documentary 90 Millas in 2008, which was about Cuban music. He got together Latin musicians to record a Spanish version of Michael Jackson's "We Are The World" to raise money for Haiti. He became a best-selling author in 2010 with his book The Rhythm of Success – How an Immigrant Produced his own American Dream. He ended up publishing two more books to help Cubans who came to America. Emilio and Gloria own many Cuban restaurants in Florida, as well as two hotels. The Estefans bought a minor ownership stake in the NFL's Miami Dolphins in 2009, becoming the first Hispanics to do so. Emilio was appointed by President Bush in 2002 as a member of the President's Committee on the Arts and Humanities. Estefan was named Producer of the Year at the 2000 Latin Grammy Awards. Emilio and Gloria Estefan received the Presidential Medal of Freedom from President Barack Obama in 2015.

They own a second mansion on Star Island that is worth at least $30 million. 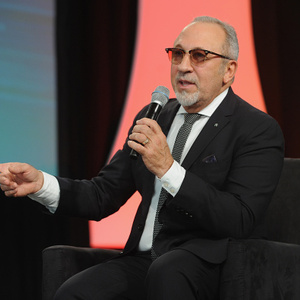