What is DeVon Franklin's net worth?

DeVon Franklin is an American film producer who has a net worth of $5 million dollars. Born in San Francisco, California, DeVon Franklin graduated from the University of Southern California with a degree in Business Administration. He minored in Cinema-Television, and quickly took his combination of business savvy and film experience, and applied it to an internship working for Will Smith and James Lassiter. He went on to become an executive at Metro-Goldwyn-Mayer, before shifting laterally to work at Columbia Pictures.

He currently serves as Vice President of Production for Columbia, and has produced such projects as the reboot of "The Karate Kid", "The Pursuit of Happyness", "Hancock", "Not Easily Broken", and "Jumping the Broom". He is also a published author, a motivational speaker, and a preacher, and has been featured in multiple magazines, including Essence and IAE.

In June of 2012, he married actress Meagan Good. The two met on the set of "Jumping the Broom". In December 2021 the couple announced their plans to divorce after 9 years of marriage. 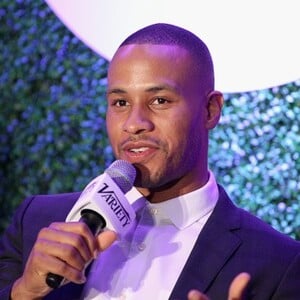