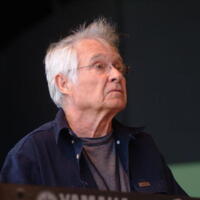 Dave Grusin net worth: Dave Grusin is an American composer, arranger, pianist, and producer who has a net worth of $20 million. He is perhaps best known for winning 10 Grammy Awards.

Dave Grusin was born in Littleton, Colorado in June 1934. His musical styles include jazz, jazz fusion, and contemporary jazz. He plays the piano and keyboard. Grusin is the co-founder of GRP Records. He has released many albums starting with Subways Are for Sleeping in 1962. Dave Grusin has also worked as a sideman for Patti Austin, the Brothers Johnson, Tom Browne, Don Grusin, Quincy Jones, John Klemmer, Earl Klugh, Jon Lucien, Harvey Mason, Carmen McRae, Sergio Mendes, Lee Ritenour, Dave Valentin, Sadao Watanabe, and more. He won an Academy Award for Best Original Score for the film The Milagro Beanfield War. He has won multiple Grammy Awards for Best Arrangement on an Instrumental and Best Instrumental Arrangement Accompanying Vocals, as well as a Grammy for Best Album Original Score Written for Motion Picture or Television.